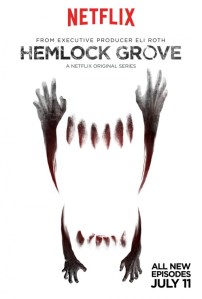 I’m currently writing the Inside Evil series finale – To Kill A Curse’, and besides being chained to the computer, I’ve discovered Netflix in a BIG way. One of the stand out series I’ve found is Hemlock Grove. Why do I love it? Because it’s damn weird!

I hate trying to put Hemlock into a box, but if I had to, I’d describe it as Twin Peaks meets X Files with a sprinkling of the Vampire Diaries (don’t shriek at the latter – all I mean by that is that it’s a small town, a few teeny boppers thrown into the mix, a high school setting…you get the idea). I’ve always loved entertainment that doesn’t feel the need to explain itself. Some of my favourite Star Trek episodes are those that are so weird you spend 45 minutes wondering what the hell’s going on and it’s only in the final few minutes that everything finally becomes clear. X-files liked to do this too, and then there was Twin Peaks; a series which never gave too much away and took weird to an entirely new level without apology. I like weird, and gruesome, and surprising, and it’s something I try to emanate a little in my own work. I know that some readers don’t like it. That’s just people; some like things tied up in nice little conclusions – which is completely fair enough. But I sometimes feel the need to write something odd without having to explain the intricacies of who, what, where or why.

I’m not posting any spoilers on Hemlock here, but I will say I was a little disappointed in the series finale. Everything seemed to get sewn up rather neatly; perhaps the executives hadn’t yet had confirmation of a second run. There were some obvious end-of-the-line moments for a few favourite characters too. I’ve had quite enough of that from George R. R. ‘I’ll create some great characters and then kill them all‘ Martin, thank you very much. There’s a steller cast, with X-Men, Six Feet Under and Battlestar Galactica alumni all appearing throughout the series. And, even better, with it being a Netflix Original Series, ALL the episodes air at once – YIPPEE, that’s TV junkies like myself happy.

With the entire new season ready on July 11th, I’m excited to see what’s in store for this series with iconic creatures presented in an entirely new way. But, for now, I better get writing because in just a few short days I’m sure to be glued to my television!